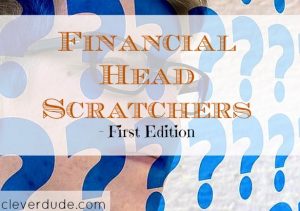 I experienced a couple of things over the weekend relating to money, finances, and frugality that made me shake my head and I wanted to share them with you. I thought this may actually be a cool thing to do from time to time, as we all run into these sort of things. I can share mine in a post, and you can share yours in the comments.

A friend had noticed the battery for his cell phone was bulging, and not holding a charge nearly as long as it should. My wife and I had recently upgraded our phones, and stated he was welcome to our any of our unused phones for free. He was hoping it would work out, as he couldn’t afford a new phone, and didn’t really want to shell out the cash to replace the battery either.

He stopped by over the weekend, and found that our old cell phones were not what he had thought, and decided he would have to purchase a new battery. Trying to save him some money, I scanned the internet and found an OEM replacement battery through Amazon for $5.99. If we ordered it that afternoon, it would be on his doorstep in three days. All I had to do was fill in his information and hit â€œSubmit.â€

To my surprise, he declined.

He hopped in his car, drove to a nearby electronics store and purchased a new battery for about $40. Honestly I was a little shocked. He reached out to us inquiring about our old phones to try to save the cost of buying a new phone or battery. It seemed like he was searching for a way to have a working cell phone by spending the least amount of money.  He had been living with the declining battery for some time. In fact two weeks had passed from the time he first inquired about our unused phones and the time he showed up at our door.

But on that day he needed the new battery so desperately that he paid 7x more than the price of ordering it through Amazon.

I was strolling through my local Walmart picking up a few things including the 2-liter of Diet Coke requested by my wife. I located it quickly and was about to grab the bottle when something just didn’t look right to me. I read the label and discovered that the bottle I was looking at was only  a 1.25 liter bottle. I looked around and found the 2 liter bottles nearby. 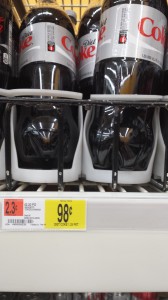 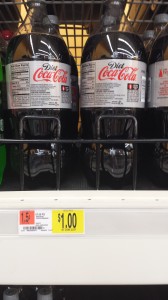 60% more product for only 2 more cents? Why would anyone buy the smaller bottle? Is a 2 liter just too big and heavy for some people?

Now it’s your turn, readers. What have you seen recently that has you shaking your head?