Don’t Pay A Repair Person To Fix Something, Pay Them To Teach You To Fix it Yourself! 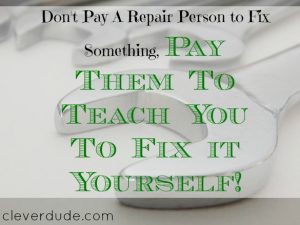 I love a do it yourself project. The thrill of learning something new, taking something apart and making something work that had previously been broken. It’s little DIY adventures that make life just a little more interesting. I do, however, know my limitations and generally concede times when a professional needs to become involved.

Usually, this involves situations where I could hurt myself and others which includes electrical work, or replacing that big torsion spring that aids in the opening and closing of the garage door. But, there are cases where I also can admit that I just don’t have the right knowledge and skill set to repair something.

Just such a scenario came upon me recently with our dishwasher. I did my usual unloading and reloading routine while making breakfast for the family. However, when I started it up,  the dishwasher started making a loud buzzing noise. I’d heard this noise before, but usually it would eventually quit. This time was different. No matter how long I let it run, or how many times I stopped it and restarted it, it kept buzzing.

After checking the interior of the dishwasher for anything that was out of place, I admitted that we needed to call a repair person.

A few days later the repairman came, and had our dishwasher back up and running smoothly within  30 minutes. Many would just write out the check and be grateful that the dishwasher was again working. Not this guy. Instead, I stood in the kitchen the whole time he was working, observing what he was doing.

I watched him remove a few screws from the bottom of the dishwasher and remove a cover that exposed the drain as well as a small motor housing with a propeller sticking out of it. I asked questions, finding out that this mechanism was used to chop up food bits before sending it down the drain. He pulled out a piece of gray plastic that appeared to have broken off of part of the dish rack. He explained that the buzzing noise was the propeller grinding against the piece of plastic. I continued to watch as he replaced the cover, and packed up his tools.

By watching the repair person, I learned the cause of our problem, and how to fix it. It wasn’t difficult to remove the cover and find the piece of plastic, it just wasn’t something I was knowledgeable with, so didn’t know what to do.

Once the repair person left, I called up my wife and explained to her what was wrong with the dishwasher. She asked how much it cost to fix the dishwasher. I explained that we paid $85 not for the man to fix our dishwasher, but instead we paid him $85 for him to teach me a new skill. 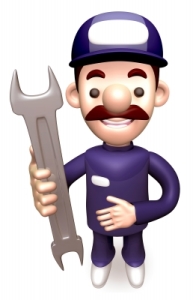 Do you watch repair people when they come to your home? Have you ever learned a new skill from having a professional fix something in your house?