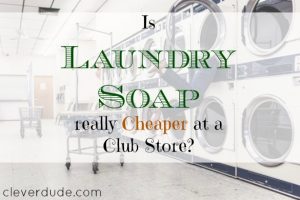 Back in April when I renewed my executive Costco membership, I vowed that I would start buying as many household items there as I could in order to take advantage of the 2% cashback perk. However, it would be foolish to just buy items at Costco for that reason only. If the cost was 10% higher, I really wouldn’t be gaining anything. One thing that I can easily buy at Costco vs where I grocery shop now (Walmart) is laundry detergent. 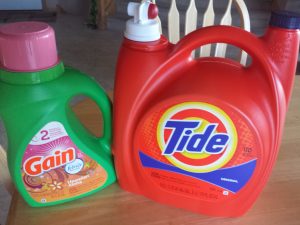 Is laundry detergent cheaper at Costco vs. Walmart?

We currently use Gain Island Aloha liquid detergent. I usually purchase a small 50oz bottle for $5.10. The typical way to price compare things like laundry soap is to figure out the price per ounce:

However, comparing cost per ounce is a mistake.

Different detergents use different amounts of product per load. What we really want to do is compare the cost per load. For my 50oz bottle of Gain, the package advertises 24 loads:

At the time of this challenge, I could not purchase our usual Gain detergent at Costco. In its place, I purchased a 170 ounce container of liquid Tide. The container advertises 170 ounces of product, but the ability to do 110 loads. Doing the price comparison breakdown:

Sweetening the deal even more, the liquid Tide had an instant manufacturers rebate of $3.50, bringing the cost down to $16.49. Redoing the cost comparison:

This is exactly the kind of product I want to switch from buying at Walmart, to buying at Costco to take advantage of not only lower prices, but also my 2% cash back. Club stores rely in part on the perception that buying bigger is always cheaper. That’s not always the case, but in this case it certainly is.