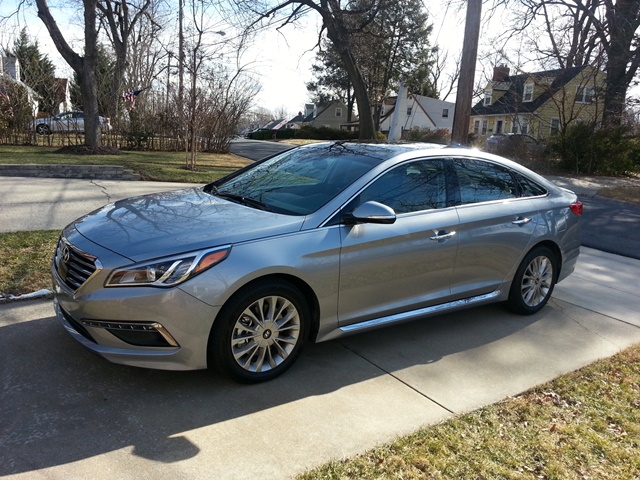 When the last generation’s redesigned Hyundai Sonata hit the scene here in 2010, the media (including myself) were blown away by the exterior design. It took the “four door coupe” design from the Mercedes CLS and applied it to a 5-seat, mainstream family sedan (while the VW Passat CC copied it first, it was a 4-seater). It was a beautiful sedan, and very unexpected from the Korean manufacturer, Hyundai.

Fast-forward five years later, and Hyundai just released its 7th-generation 2015 Hyundai Sonata. I’ll admit that when I first saw photos of the concept last year, I was disappointed. I thought Hyundai scrapped the sexy look for something akin to a Ford Taurus, but then I saw it in person. I’d say the Sonata now looks more premium and “grown up”, both inside and out. 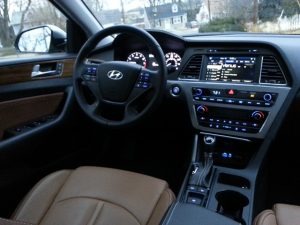 My week-long tester was the 2015 Hyundai Sonata Limited with the 2.4L 4-cylinder engine. Base price was $26,525, but the must-have options for Tech Package and Ultimate Package were checked. Throw in floor mats and freight, and the as-tested price was $32,510. Definitely a leap from past Sonatas, but definitely very competitive in the mid-size market today, especially considering the features offered. 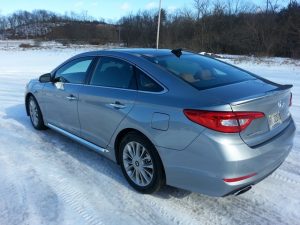 While I initially thought I would be getting the 2.0T (turbo) model, which has 60 more horses and 82 more torques than the 2.5 model, I wasn’t at all unhappy with the performance of the “weaker” engine. At cruising speeds, I didn’t hear the engine at all, and I only heard a minimal buzz when accelerating off an on-ramp. At idle, though, the engine sounded rough sometimes, but it was usually only when the thermometer hit under 20 degrees outside. Basically, you’d notice the difference in noise if you’re used to a V-6 engine, but I didn’t miss the power (and I welcomed the fuel economy!). 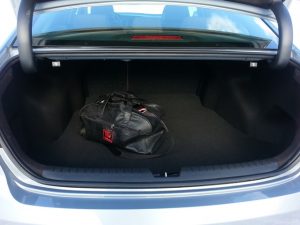 I took the Sonata on a solo, 650 mile weekend roadtrip from DC to PA and back, where they actually had about 6+ inches of snow already on the ground. I packed very lightly, but the enormous trunk could easily have taken weeks of luggage if needed. During the drive, I did find one nearly immediate complaint: The seats were as flat as a church pew! 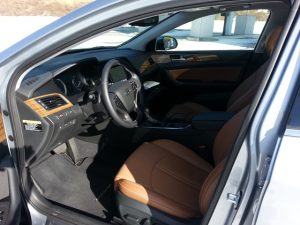 After researching other online reviews, I found I wasn’t the only one to find the seats a bit hard and flat. The leather was solid, but overly firm and had almost no side bolstering. Also, I found the thigh support to be lacking a bit, but my shorter wife didn’t complain. However, after nearly 700 miles clocked on the Sonata, I realized that I got used to the seats, and I never got sore or tired in them. I’d still like more bolstering and cushioning though.

And in reality, the seats were pretty much my only complaint on the Sonata. I had more than enough to keep me entertained with SiriusXM and HD Radio, and the combo of Smart Cruise Control, Lane Departure Warning System, Blind-Spot Monitoring System and a beautiful 8″ Navigation screen kept me safely on the road and to the correct destination. While I ended up turning off the lane departure system on local roads, I found it very useful in combating the monotony of long stretches of highway.

A bit more on the Smart Cruise Control. I’ve had cars in the past with “Adaptive Cruise Control” where the car slows down if it encounters another car going slower in the same lane. I often didn’t realize I went down from 70 to 55 until I looked down or saw people passing me, and I didn’t get frustrated with slower drivers as much. But with the Hyundai system, the car can bring you down to a full stop AND start moving you again.

Now, as much as I was afraid to test this feature, and risk rear-ending someone, I decided to give it a go. As I was entering my hometown from highway speeds, I saw I was coming to a red light with a few people already in line. The car began slowing, but not dramatically, and eventually eased to a full stop about half a car length away from the next car. It then notified me to push a button to resume when I was ready, which I did when the light turned green. I was able to keep this up through about 5 lights until I had to make a turn. Granted, you need another car in front of you to do this; it’s not automated driving, and you don’t want to fly through a red light! I would definitely recommend this option though (it comes in the Ultimate Package).

I didn’t get to test the Hyundai Blue Link service, which provides an app for remote start, lock, unlock, locating car and other features, but watching a video on it definitely makes me want it, but also wary about the security of such a system. 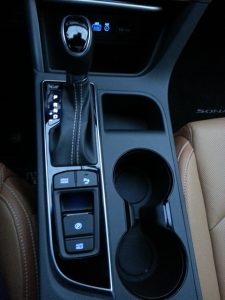 The Hyundai Sonata comes with 3 driving modes: Normal (default), Sport and Eco. Each changes the steering and throttle. Personally, I’d prefer the default steering to be Sport as I like a more weighted steering, but I did find the car likes to understeer, so perhaps Hyundai didn’t want to give drivers too much confidence? Understeering is when you turn the steering wheel, but the car doesn’t move in the desired direction right away. I think if the Sonata had some performance tires, versus low-rolling resistance versions, turns and acceleration would be smoother (although fuel economy may go down).

The 2015 Hyundai Sonata Limited is an excellent mix of luxury, style, power and economy. I was perfectly happy with the engine over the 650 miles, and ended with just shy of 27mpg. The EPA lists 24 city/ 35 highway and 28 mixed, so I was almost right on. I would contribute the lower economy to single-digit temps in PA, blasting the heater and lots of short trips around town. I don’t doubt mileage going well into the 30mpg range in more seasonal temps.

As far as value, I know $32k is a lot these days for a 4-cylinder family sedan, but when you look at the options and features, you begin to realize you’re getting much more for the money than with competitors like Honda and Toyota. I’ll say again that both the Tech and Ultimate packages ($3500 and $1550, respectively) are a must-have, and give you the following (condensed list):

I know $5000 is a lot of money, but after driving the Sonata with these packages, I couldn’t imagine not having these features given the opportunity (which I didn’t have when buying my latest truck). It’s more that can go wrong, but it’s also what could make owning a car that much more enjoyable long-term.

And, of course, with Hyundai you get an amazing warranty: 5yr/50k mile “New Vehicle” warranty, 10yr/100k mile powertrain warranty and 5yr/unlimited mile roadside assistance. No need to buy the extended warranty anymore!

So the 2015 Hyunda Sonata Limited is a solid, feature-laden car at a competitive price, and packed with safety features. It gets good gas mileage, is relatively comfortable (except for those seats, but you may like them) and spacious, and sells with excellent factory warranties. If you’re shopping in this segment, or even up one level (like a full-size), I would highly consider looking at the Sonata, especially with the added option packages.

Hyundai loaned me a Sonata for a week, included a tank of fuel and insurance, but in no way influenced my opinion or style of writing for this review.