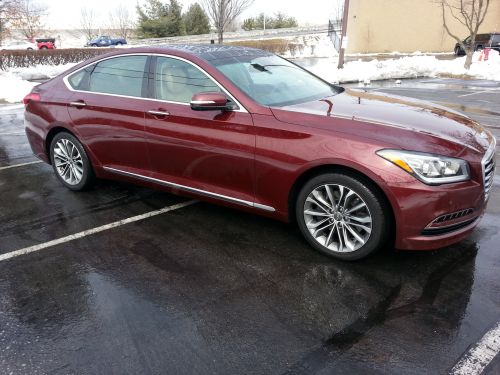 When the Hyundai Genesis first debuted as a 2009 model, it was a big risk for a Korean automaker to try to compete in the Japanese and even German markets with a Rear-Wheel Drive luxury sedan. Whereas Honda, Nissan and Toyota opted to create all-new luxury brands with Acura, Infiniti and Lexus, respectively, Hyundai decided to stick with their own brand and add the Genesis as a higher model to their existing lineup.

I applauded them for this effort, but also recognized the brand battle they would face when it came to marketing to those individuals willing to pony up premium dollars for a fancy Accord or Camry just to have a more exclusive badge. Would those buyers be willing to shop at a Hyundai dealership with the “common folk”? I knew if Hyundai could delivery on value, packaging and power, then they would have a hit. They wouldn’t take a big chunk out of the market by any means, but it would both bring new buyers to the brand and show that Hyundai means business.

The Genesis was my automotive hero because Hyundai truly went all out to compete with the Japanese and Germans, and the first generation was well-received. I took a quick spin in the first model year, and recall the interior being comfortable and stylish, and the exterior being distinguished, yet with some unique Genesis badging. I felt that if you wanted a good looking luxury car with great options for 4-5 figures less than the competition, the Genesis hit the mark. 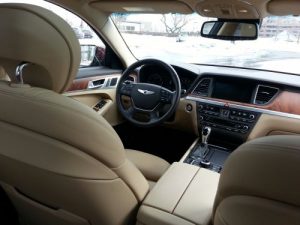 I couldn’t wait to take delivery of a 2015 Hyundai Genesis RWD 3.8 Sedan for a week. But there’s a saying: “Never meet your hero”. My problem was that I had just turned in the keys on a 2015 Hyundai Sonata Limited, and loved it. And since both cars are in the same showroom, I feel obligated to compare them.

What do you get extra with the Genesis for the added price of a base 2015 Hyundai Elantra coupe (yes, you can buy the Sonata and a base Elantra for the same price as this Genesis). Here are some positive differences between this Genesis and the previously reviewed Sonata:

But during the entire week I had the Genesis, I kept asking myself “Is this car worth $18,000 more than that Sonata?”.

And the answer to me is “No”. I really wanted to love the Genesis so much more than the Sonata, but honestly those bullet points up above just don’t add up to $18,000 to me. And I think the main problem is that Hyundai outdid themselves with the 2015 Sonata, and didn’t differentiate the Genesis enough to ask for that much more. And something I didn’t mention yet is that Hyundai already has a bigger car with the Hyundai Azera. Granted, the Azera isn’t much cheaper than the Genesis, has less power and gets worse fuel economy, but it has front-wheel drive, which leads me to…

Now I understand why I see Mercedes on the side of the road during a snowstorm in D.C.

I pride myself on my ability to drive in the snow. I grew up in central Pennsylvania (“Pennsyltucky” if you will) and drove many a car, truck and SUV in inches (and even feet) of snow. I received the Genesis 1 day before we were to get 9″ of snow here in D.C.. We were going to visit family back in PA, but decided against it, even driving my truck (Honda Ridgeline). So I drove the Genesis around town to try it out on dry streets to get comfortable with it before attempting to drive a RWD car in the snow.

And then the snow came that Saturday. My wife needed some groceries about 2 miles north of our house, so we decided to take the Genesis. I had already taken it out that morning on a Home Depot run with just light rain coming down. When I got home, my wife jumped in the car and we headed north. By that time, snowflakes were coming down pretty heavily, but still no problem getting to the store.

By the time we came back out less than 30 minutes later, we had nearly 2″ on the roads and I wondered if I made the right decision to bring the RWD Genesis, even so close to home. We had our hands full with groceries, so I had a chance to use the power trunk, which, like the Sonata, opens if you stand behind it with the key for a few seconds (but the Genesis opens and closes fully, while the Sonata just pops open), and we started up the car.

Now, in the best of times, on dry roads and sunny days, D.C. isn’t known for good drivers or light traffic, so I was definitely pushing my luck driving home in the snow. I got out of the spot and headed to the light, and quickly found that going up the slightest incline would spin the tires. I would be interested to know whether these tires were summer or all-season, but either way, they weren’t up to the task.

I’ll just say that I’m glad we kept momentum over any inclines on the way home, but I can’t explain why the car resisted going straight on flat roads so much. I tried modulating the throttle and even throwing it into manual mode to lock it in a lower gear, but I had to be extremely careful going down my lane or risk too much power kicking the back of the car into the next lane and hitting a car or the curb. And the last hurdle was making a left turn and going up over a bridge, knowing I’ve seen other cars stuck on that bridge in the snow. I was able to power up and over the bridge, even with the honking of the truck behind me who obviously couldn’t see my poor wheels spinning away, and get home, park the car and vow to never drive a RWD car in the snow again. Luckily we got a 60 degree warm spell the next day, so I didn’t have to wait long to drive again.

Blame it on the tires, the powertrain, and/or my driving, but outside of doing standing burnouts or drifting on a track (which I did neither), I would much rather have a FWD or AWD vehicle. And it’s too bad because Hyundai offers a 3.8 AWD Genesis sedan. Had I gotten the AWD model, this may have been a much different review (although the price difference would still be noted).

But does it compete against actual luxury brands?

While I’ve been comparing the Genesis to the Hyundai Sonata, I’m not sure how many buyers will be cross-shopping those two versus Acura, Lexus, Mercedes and, perhaps, Buick and Cadillac. Granted, an Acura buyer won’t have an Acura TLX and Honda Accord in the same showroom, while a Genesis shopper will have Sonatas and Azeras in front of them, so, again, a challenge for the Hyundai marketing department and dealers.

While the Genesis truly does have a premium interior and exterior to match or exceed the other brands, they quality and value is often in the eye of the beholder in this segment. My only complaint, as with the Sonata, is the hard seat. When I sat in a TLX just after returning the Genesis, it felt like a sofa compared to the church pew seats in the Hyundai. However, at least the Genesis rectified the shallow seats and some bolstering by adding power-adjustable thigh support and side bolsters for the driver. Oh, and I’ll also complain that the Genesis didn’t have a heated steering wheel! Why should I complain about this? Because the Sonata had it, as did the Kia Soul EV and even the 2012 Kia Optima Hybrid. You need to upgrade to the pricier AWD model to even get this feature (plus the heated rear seats). Someone at Hyundai/Kia aren’t communicating with each other here.

Again, I can’t help but regress back to comparing the Genesis to my earlier Sonata regarding option pricing. For some reason, very similar option packages on the Genesis are much more expensive than the Sonata. The 2015 Genesis RWD 3.8 sedan starts at $38,000, which is pretty reasonable, unless you want the luxury goodies. While still much cheaper than an equally-optioned competitor, the 3 packages my Genesis had totaled $11,000 extra:

But the Sonata Tech Package also includes the upgraded Infinity stereo and Navigation with 8″ display (smaller than the Genesis), while this is a separate package in the Genesis:

So what I’m getting at here is the Sonata’s packaging includes almost everything the Genesis has for almost $6,000 less. Hyundai, you need to start talking internally about this! You’re either overpricing the Genesis or highly undervaluing the Sonata!

I can’t say that people in this market segment don’t care about fuel economy, because they certainly do. I used to own a 2002 Acura TL-S, and regularly got 32mpg on the highway even with my lead foot. But cars and engines have gotten much bigger since then, so this RWD 3.8L Genesis is rated at 18 city / 29 hwy and 22 combined. In 132 miles of driving in the week I had the car, I averaged just 17.4mpg. I was definitely disappointed in this number, and I can’t really blame my heavy foot this time because I took it easy. I really tried to get the MPG higher on longer drives, but it just didn’t want to climb. However, your experience will vary, and I’m sure my 24mph average speed over those 132 miles indicated it was more city driving than highway, so it’s close to the city rating.

I’m extremely torn on this car because while I love the styling both inside and out, and if I compare against others in its class (e.g. Acura, Lexus, Mercedes), it’s an immense value, but I also have to compare it against its own smaller bother, the Sonata, because they sell together in the same showroom. They’re similarly sized and optioned, with different powertrains to really set them apart, but that RWD and more power didn’t prove to be helpful to me.

So my verdict is that if you’re shopping for an Acura TLX, Lexus ES, Cadillac CTS or other comparable offerings in the luxury market, then absolutely consider the Genesis. You’ll be very surprised at the quality and comparative value. But if you’re looking more for the features and options indicated above, but care more about price (but still want clean styling), then I would point you to the Sonata. It’s painful for me to write that, given the hero status I held for the Genesis for so long, but I have to be honest. If I never drove the Sonata, it would be a different report, but I did, and when it comes down to value, the Sonata will win every time.

Hyundai loaned me a Genesis for a week, included a tank of fuel and insurance, but in no way influenced my opinion or style of writing for this review.