Are School Yearbooks a Waste Of Money? 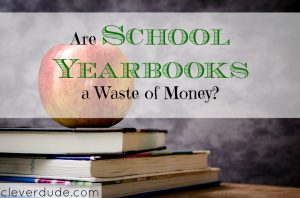 Dad, can I get a yearbook?, asked my son.

I thought back to when I was a teenager. Buying yearbook was very little about the pictures that were inside, and more about getting your friends to sign it. It was a kind of status symbol to fill up as much of the empty space as possible with the signatures and well wishes of your classmates. It also gave a shy kid like myself an excuse to talk to certain members of the opposite gender. It is his last year of middle school, and he hadn’t gotten a yearbook for a few years, so I agreed.

I realize it has been just a few years, but that’s triple the cost from when I was in middle school.

I understood why he wanted one, but I also know that his interest in the yearbook would last just the few short weeks until the end of the school year. Once summer arrived the yearbook would be placed in a dresser drawer, never (or rarely) to see the light of day again. So I upped the stakes a bit to see how important it was to him.

I asked him to pay half. He didn’t even flinch before agreeing.

The next day he brought home his 70 page, hard cover yearbook. He’s been taking it to school every day, collecting signatures and memories from his friends on the inside both covers. My opinion on the yearbook softened for just a minute as I dug my 8th grade yearbook out from my closet. I read two messages before I made up my mind for good.

What a waste of money.

Signatures and messages that held so much significance then, meant nothing now. I hadn’t talked to some of the people since the day they signed that yearbook. Yet we’re all conditioned to believe that the school year is not complete without purchasing a remembrance capturing the “magic” of that year. Looking closer at my son’s book, fifteen pages were simply pictures of popular trends, songs, and news stories from the past year and had nothing to do with their school at all.

I was recently discussing the price of yearbooks with a neighbor who has a graduating senior and realized I should consider myself lucky.

Apparently he shelled out $76 for his son’s High School yearbook.

Do you think yearbooks are worth the cost? How much did your child’s yearbook cost this year?