A New TV vs. $325 Lightbulbs, That is the Question 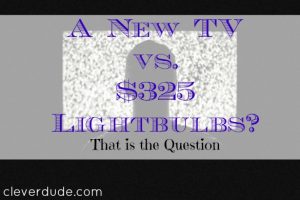 I ran into the living room to find the TV had turned itself off, and a whiff of burnt electronics in the air. I knew exactly what had happened, the lamp that illuminates the screen of our LED TV had burnt out again.

Let me back up and give you the full picture (no pun intended) of why this bulb has been a source of frustration.

We purchased this TV in May of 2004, completely unaware that there was even a light bulb inside the TV. Every TV I had owned previous to this was a picture tube TV, which contained no such thing. We became very familiar with this light bulb very quickly, unfortunately.

The bulb burnt out the first time within the first year of ownership. The TV was still under warranty, so Panasonic replaced the bulb for free. We learned that the bulb was supposed to last on average 10,000 hours of use. If the TV was on for five hours a day, a bulb would last more than five years. We laughed at the fact that we dodged a bullet of paying $325 for a replacement bulb.

Over the next nine years, the light of our life burnt out a total of seven times. We paid $325 for a replacement bulb once, after which we discovered after market bulbs on Amazon ranging from $40 – $100.

Each bulb lasting just over a year on average.

At some point we called Panasonic and learned that there had been a class action lawsuit in which they admitted there was a defect in the TV causing the bulbs to burn out more quickly than they should. They offered owners $700 towards buying a new TV. Unfortunately the lawsuit period had ended and we were no longer eligible for the buyout. To my knowledge, we never received anything in the mail on this lawsuit, otherwise we would have been all over it.

Now that you have some background, you can likely guess my reaction as this bulb burnt out after having replaced it only five weeks ago. I was slightly unhappy. I instantly hopped on Amazon and ordered another after market bulb for about $50. It should be on my doorstep within a few days.

My wife would love to sell, or simply dump the TV and get a new one. I’m equally as frustrated, but it’s much less expensive to buy a $50 bulb than to go out and buy a replacement TV. At some point, it does become death by a thousand pokes. My wife is already there, I’m not.

She proclaimed that this is the last bulb we buy. We will replace the TV when this bulb goes dim, whether it’s next year, or next Wednesday.