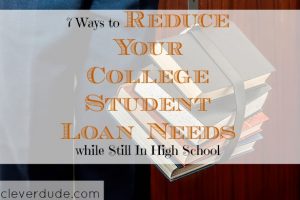 My son is half way through his Junior year of high school. In the coming months we’ll be visiting and applying to colleges. It’s an exciting time in his life, but at the same time we’re wary about the amount of student debt he might incur by earning a college degree. In 2015, the average college graduate with student loans had just over $35,000 in student debt to go along with their diploma. College graduates spend years paying back student loans.

While he won’t officially apply to colleges until late summer, and financial aid applications don’t get completed for a few months after that, we’ve been thinking about the cost of his college education for awhile. If we can minimize the amount of school loans he will need, the less he will have to worry about paying off student loans after graduation.

First, we needed to educate ourselves on what different loans for students are available.

Federal Stafford Loans are given based on financial need. They are subsidized by the federal government, which means the interest on the loan is paid for by government while the student is still in school. They carry a low interest rate, and can be obtained from banks, credit unions, or from the federal government itself. Repayment of federal subsidized student loans begins six months after a student graduates, leaves school, or drops below half-time status.

Federal unsubsidized loans are very similar to their subsidized counterpart. One major difference is they are not based on financial need. They are an option for students who can not obtain other types of financial aid, and are very easy to quality for. Because they are unsubsidized, the borrower is responsible for the interest accrued on the loan while the student is in school. Mirroring subsidized loans, borrowers begin making student loans payments for their unsubsidized loans six months after a student graduates, leaves school, or drops below half-time status.

Federal PLUS loans can be used to pay for education costs not covered by other forms of financial aid. The lender of PLUS loans is the U.S Department of Education. Borrowers must have an adequate credit history, and the maximum loan amount is the school reported cost of attendance, minus any other financial aid received by the student. Interest rates on PLUS loans are generally higher than other federal student loans. Repayment of Federal PLUS student loans begins as soon as the loan is fully disbursed. Parents of undergraduate students can request to have PLUS loans put into deferment while their child student is enrolled at least half-time. PLUS loans for graduate and professional students are placed into deferment automatically if the student is enrolled at least half-time. Repayment of PLUS loans in deferment begins 6 months after the student drops below half-time enrollment status.

Federal Perkins Loans are loans awarded on extreme financial need. Perkins loans are among the best student loans as the Interest rates are very low. However the amount of funds is also limited. Not all schools participate in the Federal Perkins Loan Program. Repayment of a Federal Perkins Student Loan begins nine months after a student graduates or drops below half-time status. However, interest will accumulate while the student is in school.

While there are many types of student loans available to our son to pay for his post-secondary education, our goal is to enable him to graduate with as little student loan debt as possible. Even as a high school student, there are many things that he can do to reduce the amount needed to be borrowed for his college education so he doesn’t have to worry about student loan payments later.

Many scholarships and grants are based on a student’s academic transcript. My wife and I explained to our son before his freshman year of high school the significance of his grades from that point forward. His high school grades will affect his ability to get free money for college, as well as what schools would accept him. This was a lot of pressure to put on a fourteen year old, but unfortunately it is a reality of life.

Be Active and Involved

Involvement in school and community activities can differentiate a student when applying for grants and scholarships. It can also broaden the spectrum of what grants and scholarships he may be awarded. I applied for and received a mass communications grant because I was involved in the school newspaper even though I wasn’t going to study mass communications in any capacity.

Apply For Grants and Scholarships

When I was a high school senior, I stopped by my high school counselor’s office every week asking if they had received any information regarding new scholarship or grant opportunities. I filled out countless applications, and wrote dozens of essays.

My son’s high school provides the opportunity for students to take classes at a nearby community college that count both towards his high school graduation requirements, AND college credit. The more classes he can take for free while in high school, the less he has to pay for once he gets to college.

My son’s high school also offers many advanced placement classes. After taking the class, which contains accelerated content, students can take a test for a nominal fee which is usually subsidized by the school district. Qualifying AP test scores can transfer as college credit. Taking as many AP classes as possible is another way to earn college credit for very little money while still in high school.

Get A Job / Save Money

My son works 17-20 hours a week at a grocery store. He makes a good amount of money for a high school student, and doesn’t have many bills. We have an automated transfer set up from his checking account to his savings account the Monday after each paycheck is issued. This keeps his checking account continuously growing. This money can be used to help pay for basic living expenses in college.

Set Your Sights On Community College

Our ultimate goal is to have our son graduate from college debt free. We may not be able to quite attain that goal, but by being knowledgeable about how student loans work and taking deliberate actions during his high school years, we certainly have the tools to reduce significantly the amount of student loan debt he will need to incur. By starting off his adult life with as little student debt as possible, he can begin building wealth instead of paying off student loans.

Do you have a high school student? Are you taking action now to reduce the amount of student loans they will need later?