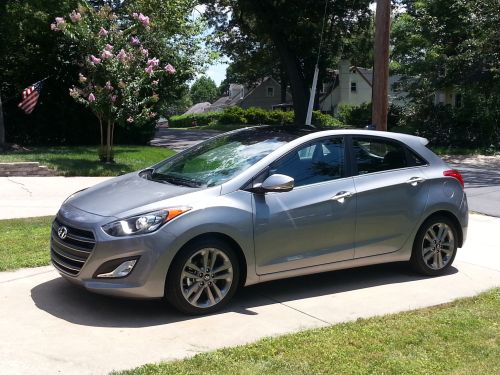 I’m going to take an odd tactic in this review. Instead of comparing the 2016 Hyundai Elantra GT to other cars in the compact class (and model year), I’m going to compare it to my 2007 MINI Cooper S (yes, they capitalize all 4 letters). Why? Mostly because they’re both hatchbacks, have similar power ratings, and I’m very familiar with driving our used MINI for the last 5 years of ownership. I’ll also randomly compare it to a 2008 Hyundai Accent and a 2002 Acura TL-S, just for fun.


Hyundai provided me the Elantra GT for a week to test, and I’ll  immediately say that it’s SO much better than the 2008 Hyundai Accent my wife rented years ago. That Accent actually made her cry because it was so bad., but that’s a story for another time, and Hyundai has seriously upped their game since then.

Now a bit about the Elantra GT. The Elantra is a compact car, a step above the subcompact Accent and the MINI Cooper to which I’ll compare it shortly. The “GT” is the top model, only comes as a hatchback, and actually sits on a different platform than the current Elantra sedan. This GT model is based on the European-market Hyundai i30 hatchback, so we really can’t even compare it against the current Elantra sedan.

As with most Hyundai and Kia cars, the Elantra GT A/T (automatic transmission) comes standard with many features, and stickers at $19,800 plus $825 freight & handling. But our Elantra GT came packed with extra goodies in the Style Package ($1,975) and Tech Package ($3,950). But here’s my first gripe. 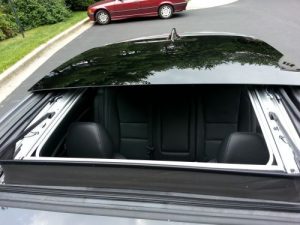 You can’t add the Tech Package without adding the Style Package. Why???
If you want navigation, leather, a panoramic sunroof, vented front seats, or a rearview camera (which should be standard soon), you basically have to spend almost $6,000 for BOTH packages. Granted, the Style Package has some desirable content as well, like proximity key and push button start (which would be more tech than style, wouldn’t it?), but this bumps the final price up to $26,675 out the door.

I’m not going to complain about prices for small cars anymore because after pricing out competition, these specs fall right in line. I guess my brain is still stuck 15 years ago when I got my first loaded Acura TL-S for just a couple grand more than this Elantra GT (below invoice of course), but I’m just an old fuddy-duddy. In fact, the Elantra GT probably has more room, luxury and amenities than my 2002 Acura TL-S, just less power and luxury feel.

Well, in most ways, OF COURSE IT IS! It’s quieter, more spacious, probably more reliable (or less costly if something does break), gets better mileage and either has more features, or better ergonomics around the same features.

Power: The Hyundai has 173hp vs 172hp in the MINI Cooper S, BUT the Hyundai only has 154lbs-ft of torque vs the 177lbs-ft in the MINI. That “grunt” makes the biggest difference in sportiness and acceleration. But, alas, it just means the MINI gets confused which “wheel” needs the power, and ends up sending it all to the steering wheel, which promptly tries to send you careening off a cliff. But again, a story for a different time.

Fuel: The Hyundai requires just 87 octane, but our MINI requires 91 octane. Both have similar enough fuel economies and gas tank volumes, but it’s much harder to hypermile the MINI when it’s so fun to drive sporty.

Transmissions: Both have 6-speed automatic transmissions with auto-manual gear selection. I really don’t see when you would feel inclined to manually shift the Hyundai except to force a lower gear for passing. But in the MINI, the paddles behind the steering wheel entice you even more to drive it like a go-kart. The MINI also has a Sport button that enhances the steering, gearing and suspension, much like smelling bacon cooking will convert me from a couch potato into Usain Bolt.

So we’ve determined that both are hatchbacks with the same horsepower, but the MINI has more torque. It’s also smaller, has stiffer, sportier suspension, but is also more expensive and (in my experience) unreliable/costly, even after our extended warranties. Now about the goodies, and my thoughts on each:

Of course I would recommend the 2016 Hyundai Elantra GT. It’s comfortable, efficient (over 30mpg across 500+ miles and 11 hours of driving), is competitively priced and optioned, stylish and feels bigger than it is. I’d be interested to drive a base model GT without all the option packages, as well as an Elantra sedan to really compare, but soon enough they’ll all be on the same platform.

As for the MINI, I DON’T recommend buying a 2007 MINI Cooper S…unless you really want one in white, gently driven and only leaking a little oil.